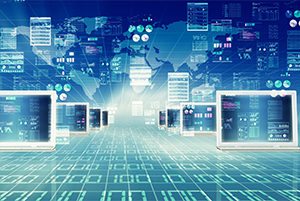 The digital revolution started off with vacuum tubes and punch cards, and machines the size of a building’s entire floor. For its time, Univac was a modern marvel but nowadays the phones we all have are significantly more powerful than the computers that flew man to the moon.  In all fairness, it is unrealistic to compare the two given the decades of electronics developed from the space program’s initial work but the fact that the Apollo computers couldn’t crash meant all the difference.

In the more complex electronics world, we now find ourselves in we have to design IT systems for redundancy. Selecting the hardware is a critical starting point. Do you go with individual servers, hyper-converged systems (see our previous post on what HCI is), or blades?

Each type has their role to play. Blade servers were quite a bit more popular in the past but are due for a comeback. Virtualization has led to dense installations in data centers and a blade chassis is a great way to minimize the number of network and power cables required compared to the traditional “pizza box” style deployments of standalone servers. The downside is the added complexity and management that comes with this middle layer of hardware.

When selecting a hypervisor host a blade can be a great fit. Generally, hypervisor hosts need significant CPU and Memory resources and a few networking uplinks but little in the way of local storage. Blades offer a solution of deployments with efficient use of power and cooling while minimizing the floor space in use. Blade chassis systems usually hold 16 half-height blades in the same space as 10 single U height servers. That’s a 60% improvement!

The up-front costs associated with the chassis and networking will be higher if the system isn’t used to capacity on day one, but future upgrades become much easier with reduced risk as your IT staff does not need to be changing cables on a routine basis to bring an additional host or two online. Remote management and monitoring of these systems has come a very long way in the last ten years as well, and can reduce the need to be physically present in front of the device in order to work on it.

Every project will have its own unique goals and requirements. When your next project calls for additional compute hosts perhaps it is time to forget what you used to know about them take a second look at blades. To learn more call Thrive today to speak with one of our experts.