Users looking to assign an approval to multiple people in Power Automate (or Microsoft Flow) using a Multi Choice People Picker field in a SharePoint list, may find that it isn’t as straight forward as it might seem. When users feed the field value into any approval step, it will throw it into a for each loop (as shown below). A challenge arises since users now face an approval being individually assigned to each person defined in the list item. The goal is to have one main approval and if someone in that list approves or denies it, the approval process is completed. To do this, users need to build a string array separated by semicolons and feed that into the “Assigned To” input. First, initialize a variable called “Approvers” and set it’s type to “String”.

Next, set up a for each loop based on the Approvers field in the SharePoint list and append each Approver Email to the string variable using the “Append to string variable” action. At the end of the variable, simply type in a semicolon so the completed string will be the email with a semicolon at the end. Lastly, users can recreate an Approval step and feed it the new Approvers variable. 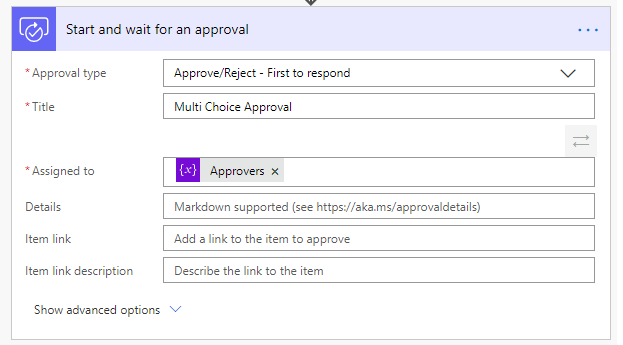 With this, users will notice notice that it is no longer thrown into a for each loop and they will get one single Approval tree to work with.